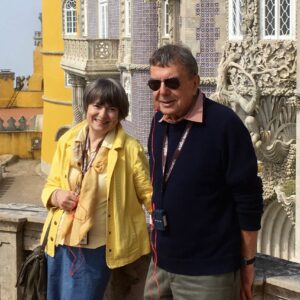 Nancy Nourse and Al Rands were attracted to SPSS by the church’s music and –more particularly- by the opportunity to participate in the music program. Nancy is a talented flautist who as well as singing in the choir, plays frequently as a soloist. Both were raised Anglican. Al was born in England and attended an Anglican school. Nancy was born in Picton Ontario and came to Toronto as a teenager where she attended St Margaret’s in North Toronto.

Nancy, who had a career as a high school music teacher, has degrees in both music and education from Queens University as well as graduate work in both the UK and the United States. Al worked in the provincial public service with a sabbatical year traveling the world with the National Defense College. His interest in church history and protocols finds voice in service on the Advisory Committee as well as in being a sides-person.

St Peter and St Simon, which they joined in 2018, is obviously not the first church either of them has belonged to. Nancy, who describes it as “historic, aesthetically beautiful, diverse, with a solid traditional liturgy and values,” says: “I felt very welcome right from the offset.”