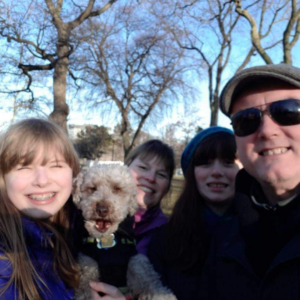 One of Matthew Beesley’s forebears, an ordained priest who refused to give up his Catholic faith, was imprisoned and tortured in the Tower of London before being executed in 1591. During his imprisonment, George Beesley spent hours in prayer, carving words from Psalm 42 into the wall of his cell. He was beatified by Pope John Paul II in 1987. With this in mind, Matthew wonders what his ancestor would think of him, four centuries later, becoming an Anglican but feels “He’d probably be glad I’m going to church at all.”

In late 2003 Matthew and his wife Lesia were looking for a church that would baptize their new-born twins, Emily and Madeline. On his way home from work, he passed St Peter’s Carlton Street, right in his neighborhood, saw the doors open, popped in, and had a look. The priest was welcoming, and the Beesleys signed up.

Matthew soon became heavily involved, serving as church warden during a difficult time when the congregation was trying to keep its building from closing. When the church did close and the St Peters parishioners moved to St Simon the Apostle, the Beesleys followed and Matthew now serves as chair of the advisory council.

Sales manager for a veterinary supplements company, Matthew’s work often takes him traveling. A history buff, he likes to take these opportunities to drop in to an Anglican church, especially if it’s in an exotic place that has a sense of history.