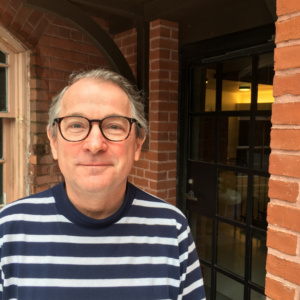 If he looks past the construction cranes in his fast-changing neighborhood, Christopher Ashby can almost see the green of the SPSS church grounds from the fourth floor balcony of the condo he shares with his partner, Alain. A member since the 1990s Christopher, who works in the hospitality industry, grew up in Thunder Bay after being born in Edmonton. His family was United Church but Christopher chanced into St Simon the Apostle in order to attend the funeral of a friend. “I was immediately taken by the architecture,” he says, “the art, the ambience and the warmth of the place –as big as it is not withstanding.” Soon after, when he was looking for a church to attend on a regular basis, he came back. One thing he found very much to his taste was SPSS’ ministry of traditional choral music. “My spiritual connection is to the music program.”

He remains involved supporting the church in many ways. An early example was to put on a boater hat and bring his sales skills to bear helping to organize and run the annual spring rummage sales.  “In order for the church to survive, “ he says, “everybody needs to offer something.”